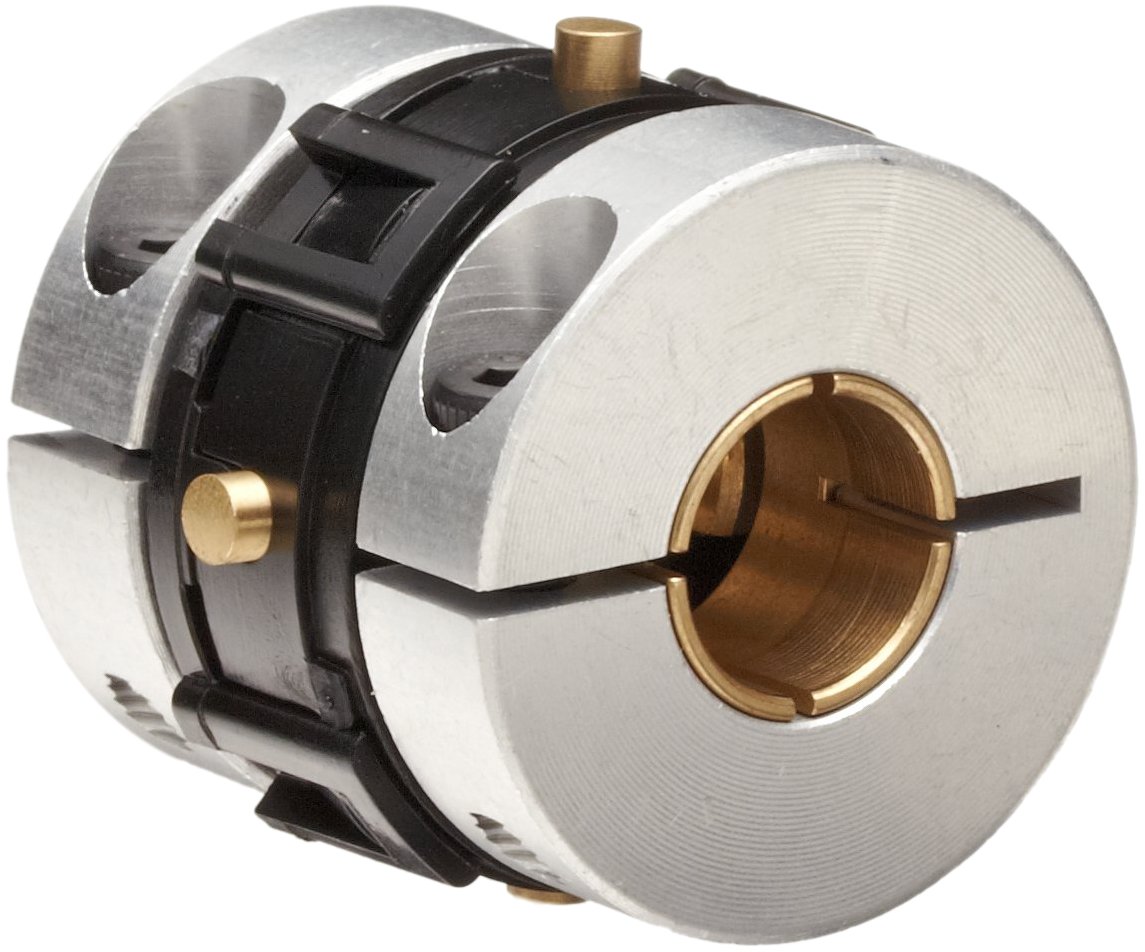 This Huco universal-lateral coupling has brass hubs with a chromate and passive finish and black-oiled alloy steel fasteners for strength, durability, and corrosion resistance. The flexible Acetal torque ring provides strength and flexibility in a sliding and pivoting mechanism that accommodates angular, axial and radial misalignment. The aluminum alloy collet hub and ring clamps have an alocrom finish for corrosion resistance and the coupling can operate in temperatures ranging from -4 to 140 degrees F (-20 to 60 degrees C). Because of its resistance to axial motion, this Huco universal-lateral coupling is particularly suitable for applications involving light push/pull duties and anchoring axially unrestricted shafts. The coupling is suitable for use with dosing pumps, positioning slides, potentiometer drives, tachometer drives, resolver, encoder, and other light duty drives, among others.

Flexible couplings are used to link two rotating shafts that are not aligned in order to transmit the rotational power, known as torque, from one shaft to the other. Most flexible couplings consist of two hubs and a middle assembly; each hub attaches to a shaft while the middle assembly flexes between the hubs to accommodate the misalignment of the two shafts. Shaft misalignments are generally either parallel or angular and cause complications to transmitting rotational power from one shaft to another in the form of stresses, loads, vibrations, and other forces, which vary from one type of misalignment to another. Flexible couplings are used in a broad range of applications, such as in motor vehicles, conveyors, escalators, agricultural, forestry and mining equipment, aeronautics, robotics and space exploration, among others.

Huco Dynatork manufactures couplings, piston air motors, brakes, clutches, gear boxes and other transmission products. The company, founded in 1965, meets the quality assurance standards of the British Standards Institution (BSI), the International Organization for Standardization (ISO) and the Deutsches Institut fÃ¼r Normung (DIN), and is based in Hertfordshire, England.

It has been a long time coming but NZ On Screen is delighted to bring you ‘John Clarke – The Collection’. From Fred Dagg’s first TV appearance in Gallery, to a moving tribute programme following Clarke's death, this collection celebrates the outstanding career of a beloved Kiwi comedy legend. We would like to acknowledge and thank the Clarke family – in particular daughter Lorin – for their support in enabling NZ On Screen to bring this collection to life.

Whatever your interest, we have something for everyone.

We've curated iconic screen moments to create a range of collections, from bloopers to protests.

Catch up with your favourite New Zealand screen personalities